Family is what got him started in drag racing and it’s what keeps the five-time IHRA World Champion going 30-some years later.

“I started going with him to the races when I was in school and all the way up through college,” Furr recalled. “I didn’t have enough money to race myself, but I watched it and got hooked on it. I wasn’t very good at it when I started, so I never thought I would run with it as I have. John made it look easy, but it was very, very hard for me.”

That may be so, but once Steve got the hang of it, he was always in the running.

He posted a record of 18 IHRA national-event wins, 37 IHRA Pro-Am wins, and numerous divisional victories. None were as memorable as the very first national win. 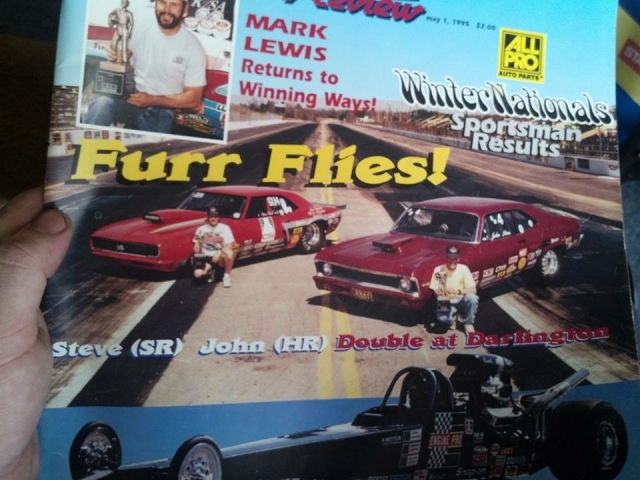 “The first race I won, they put us on the cover of Drag Review with the ‘Furr Flies’ headline,” Steve said. “I had switched to Super Rod and John ran Hot Rod. I bought a car in 1994 and we did a ton of work to it. The first race in 1995 at Darlington, we both won and it was such a huge deal. I didn’t think it could get any better than that.

“It was a huge accomplishment. We went on to win multiple times after that, but that first time is special.”

That victory propelled him to winning multiple races and his first world championship in 1996.

Besides his brother, Steve was inspired by world champion Scott Duggins, who has always built engines for him. He also learned by racing his hero, Alonzo Moore, and others like Rusty Cook and Carl Watts in Super Rod.

“I remember going with John, watching all those Super Rod guys and thinking it was the coolest thing,” Furr said. “I wanted to get in that class although it was a class full of sharks.” 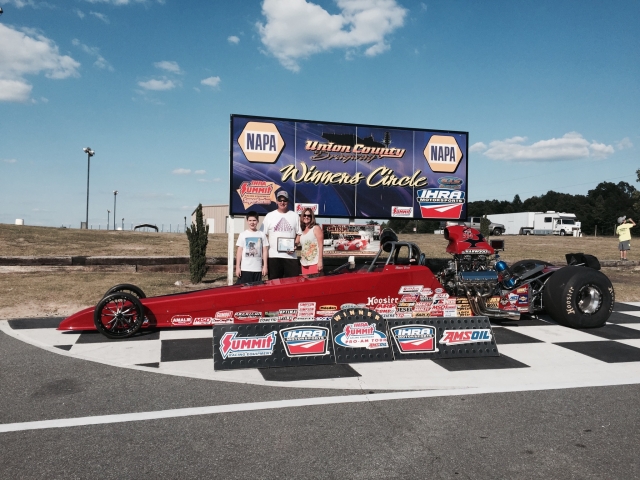 Steve also learned a lot traveling with one of his brother’s toughest competitors in Hot Rod, Marshall Smith Jr.  With such knowledge around him, it wasn’t long until Furr was making his own mark as one to beat.

“It progressed quickly. I won my first race in ’95 and won the championship with my Camaro in ‘96,” he said. “John won in Hot Rod so we got to get up and make speeches together. I was talking to Edmund Richardson and he got me thinking about two cars. So I ran a dragster at 8.90 a few years.

“I had some success. I finished second in both cars in 1997 and John did as well, so in all the rod classes we finished second. Scott then talked me into swapping cars for a year. He drove my 8.90 and I got into Top Dragster. He won the 8.90 championship in my car and got me introduced to spraying nitrous and going fast. I was hooked after that.” 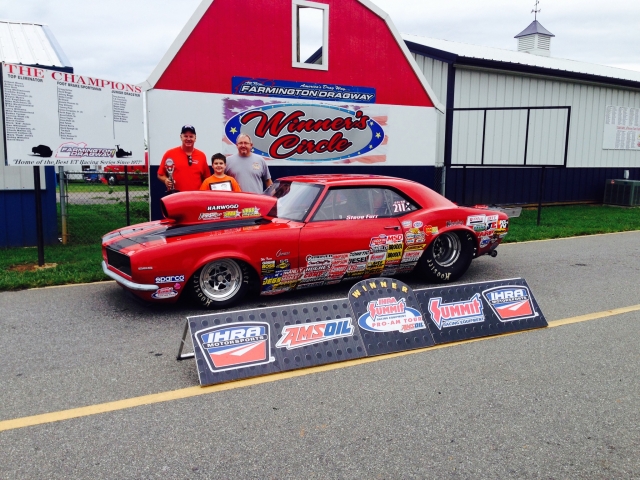 A two-time Sportsman driver of the Year in 2004 and 2006, Steve continued to be a force in both Super Rod and Top Dragster. He was the Super Rod champion both of those seasons and also finished runner-up to Bryan Bennett in the 2006 Top Dragster point standings. 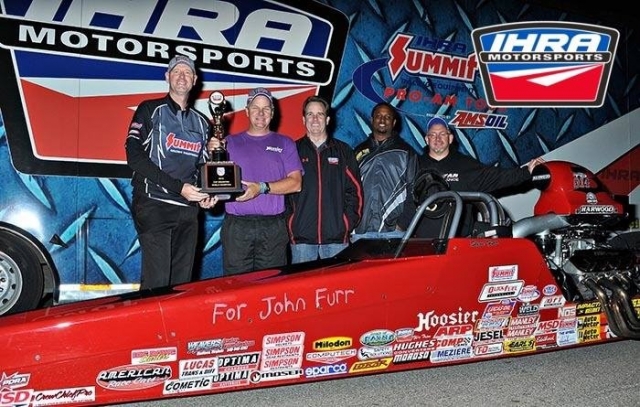 He has a combined 92 IHRA and NHRA victories, over 170 final-round appearances and was PDRA Top Dragster World Champion in 2020. Some of the race tracks he loves includes Darlington, where he won that first race, along with Rockingham, only 75 minutes from his home, and Maryland International Raceway.

While the first win is the most memorable, the 2016 season was particularly meaningful. John died in September that year and Steve won the IHRA Top Dragster world championship weeks later. There was a late-summer stretch where he won every IHRA and NHRA race he attended.

Photos from that World Championship victory lane, show the words “For John,” painted on Steve’s dragster. The family tradition continues with Steve’s son, Nick, now joining him at drag strips across America. 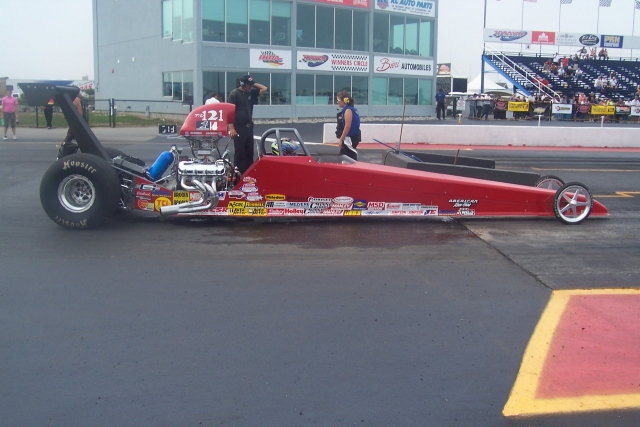 “We got him in Junior Dragsters when he was eight,” Steve said. “Nick, who is now 20, is racing John’s Nova that he won the championships with. He loves it. I’ve had him in the dragster a little bit, but he always gravitates back to John’s Nova. He thinks it’s so cool when people tell him they used to race against John in that car back in the day.”

Steve still credits his big brother for the success he has enjoyed. “I didn’t have any idea what I was doing, but he was always mentoring me and teaching me,” Steve said. “I’m sure I was a pain to deal with. I see a lot of me in my son and me getting on him. My brother could be hard on me and I can be the same with my son.

“You want him to be good and disciplined at it because this is a disciplined sport. You’ve got to be tough to be good at this. I’m thankful to John for being where I’m at today.” 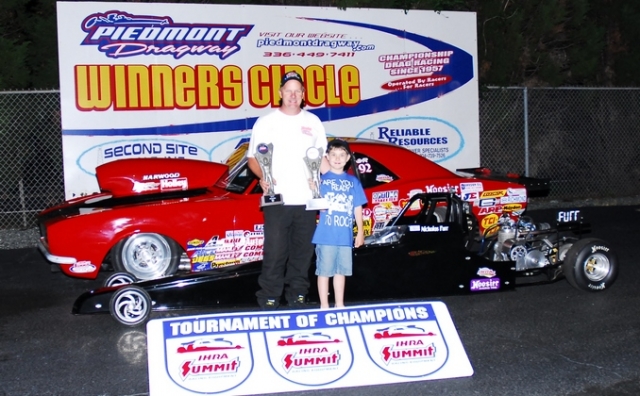 As much fun as the national events were, Steve also remembers the divisional events as fondly. He racked up divisional titles, racing at different tracks in the Carolinas like Piedmont and Farmington. Even when points format was changed, he still raced at a lot of divisional races because he enjoyed them. He also enjoyed the camaraderie of the IHRA officials, mentioning Danny Waters Sr. and others who helped create great memories.

“The IHRA was a great place to race for years because of those guys,” he said. “It was such a fun time to come to the track, a great atmosphere and the IHRA always treated you right. I always appreciated all they’ve done for the racers.”

Now 55, Steve is still going strong. Still one of the drivers to beat, there doesn’t appear to be plans to slow down anytime soon.

“I started in my early 20s. My brother was smart enough to quit in 2010 when he started his own business at home,” he said. “I continued and even though he wasn’t going anymore, I’d still talk to him about it. I guess I’ve just got hooked on it over the years and as long as my son stays interested in it and I’m still competitive, we’ll keep doing it.”